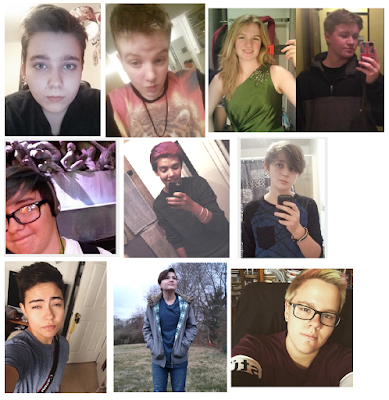 Trans Trender facebook groups, internet forums and tumblr groups are the new playground for pedophiles. These groups are filled with young, insecure, secretive, troubled and often underage girls much like the ones seen here. Pedophilic pervs like the one I'm about to feature in this post, are sniffing around the tighty whities of trans females throughout the internet. These sicko's are not merely tolerated on trans trending sites, they're welcomed by group moderators and members alike. Both, I suspect, misguided by a sense (hope) of male bonding, but the only things these perverts are interesting in bonding, is their dicks to any orifice they can trick a trans trender into providing.

An open FB group called All transmen know each other  has been posting topless (child pornography) pictures of (some under age girls) and yes this has been reported to the FBI. I'm working with a particular agent as I write this. ANYONE who has clicked on these children's photos is being tracked by said agent, I cannot at this time give any other info out. Therefore if you choose to go to this FB group, DO NOT GO BEYOND PERUSING MODE or you may find yourself on a sex offender registry soon!

This guy has been lurking around various trans female FB groups for months, and tried interacting with one of the underage girl's (age 14) who posted her bare breast yesterday:

Joe isnt much of a smooth talker and seems to pretty much stick with the same line:

Joe clearly doesnt care which side of the trans fence his kinks lie, anymore than he seems to care what age. Joe is also one out of millions of perverts prowling Trans Trending sites for action. Whether thats charming their way into actual face to face encounters with these girls, or copying/redistributing their underage nude photos to fellow deviants, it is obvious transgender female youth are the new merry-go-rounds that pedophiles everywhere are hoping to have a turn.

Perhaps if the majority who regularly bemoan my photo documentation of Trans Trenders paid a bit closer attention to home, they'd see who the REAL threat to their precious pictures are.