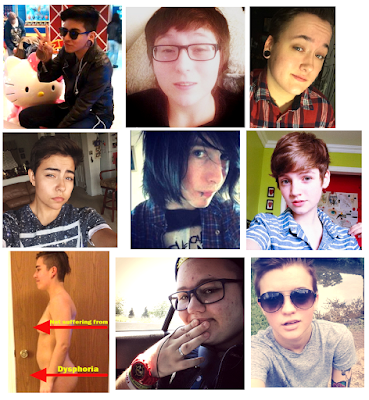 Last week I received this in the email box connected with this blog:

Doing a quick bit of research this immediately popped up: 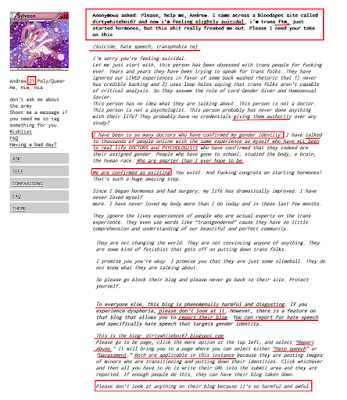 That Trans Trenders are so ill-equipped to handle even the most mildest (or any form) dissent begs us to ask why the Psychiatric/Medical Communities are giving them the big green light to transition? How fragile is this girl's psyche, if randomly running across a website, has thrown her into a suicidal quandary? Psychological assessments INSANELY do not factor into Gender Dysphoria diagnosis, merely tick boxing a small discriminatory check list. A check list created by/voted on what to include by the very same doKtors who diagnosed homosexuality as abnormal, cross dressing as abnormal, female promiscuity as abnormal, unwed mothers as abnormal, introversion as abnormal, transsexualism as abnormal, all at varying points in their careers!

There are two crucial issues here:
These girls arent the new men of 21 century progresses, they are young women seemingly MORE fragile and frightened than all women past. Their doKtors have let them fall under the assumption that if they blot out all that THEY feel makes them unhappy or insecure, happiness and security will will fall into their laps. Life is fraught with difficulties, misfortunes and tragedies, until we can smile in the face of that, we will be a stranger to both happiness and security. Something the young woman in question will remain, along with the young woman who reacted to her plight. Along with the women in this post.