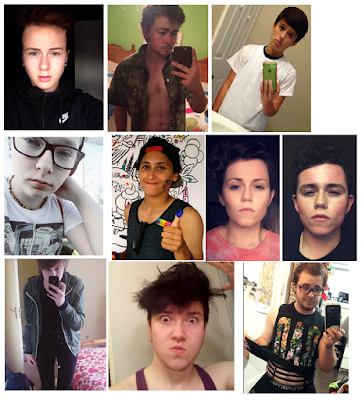 Not surprisingly (now that its legally diagnosable in children) since the DSM-V emerged a few years ago (2013), schools have been flooded with information on how best to ferret out "transgender" gay/lesbian children and school policies forged on how best to fix them. The diagnostics's forty days and nights of new and approved mental illnesses have also awash the landscape with a deluge of transgender clinics sprouting up like hungry Venus flytraps ravenously awaiting their next homosexual feeding.

One such eugenics clinic is GENECIS, (yeah I noticed the word proximity too-scary!) who boast of having treated a whopping 102 children!

“For very young children, as they work with their therapist, they can continue to explore their gender identity in a safe way, because puberty blockers are pretty safe, and it’s reversible," she says.

This is the garbage heap, programs like Genecis are shoveling to unknowing/fearful parents/school authorities. A big so-what-if-we're-wrong, these hormone blocking drugs wont harm your child. And whether or not he or she transitions, its all good either way, no harm done! No information on possible side effects, definite side effects, permanent side effects or the pending lawsuits over the side effects! 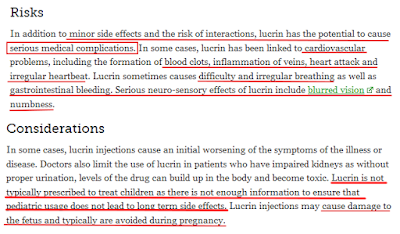 Hmmm, interestingly puberty blockers can harm a growing fetus, but not a growing/developing child outside the womb??

The claim that 60% of gender dysphoric gender non conforming youth attempt suicide has no reference whatsoever, unless we're counting pulling a number out of your asshole a reference. Genecis also fails to define who or what is gender non conforming; Boys who take an early interest in cooking and who might have grown up to be master chefs? Boys who played house with girls? Boys who want an Easy Bake Oven? (My older brother had one-boy would he be in trouble today!) Girls who excelled at hopscotch, kickball or hide and go seek? Girls who are presidents of their class? Girls who want to grow up to be the President?

After further digging, I discovered the asshole that Genecis has artfully cultivated to frighten parents into transitioning obvious gay/lesbian children with. Genecis's 60% of trans-suicide thoughts comes from a small study of 123 youths from 2012 (pre-dating the DSM-V), and this study in itself is a lark. Of the 123 youths, only 84 were used in order to best present the results the study was seeking to prove, i.e. transgender youths are highly at risk for suicide if not transitioned asap. Of those 84, 25% respondents indicated their parents were somewhat supportive of them being transgender, while 42% indicated their parents were totally against. Because the number of participants who had at some point in the past year for ANY reason had a suicidal thought werent high enough, the study combined the 25% and the 42% to get 67%. Therefore the study isolated the 67% from the 84 (which you remember was isolated from the 123), to then claim 60% of the 67% had thought about suicide (thought-NOT attempted) in the past year!

Biased transgender suicide studies such as these universally conclude:

But what youths are REALLY at risk for suicide? And whose teen suicidal narratives are transgender/pro-transgender cultist using/abusing? And what happens to that 60% number when we remove the T-transgender?

As purposefully difficult as it is to find gay/lesbian studies irrespective of transgender these days, this study from 2004 on GL(B) youths/suicide, more than 37% of GLB youths didnt merely THINK about killing themselves, they TRIED to kill themselves! Concluding reasons for their wanting to die?

"Sexual orientation alone accounts for only a small portion of variability in suicidal ideation and attempts. If protective factors were enhanced among GLB youth, suicide in this population is expected to be considerably lower. Protective factors examined here are amenable to change and should be targeted in interventions." I feel a sense of deja vu, didnt we just read that same conclusion for the current mental health requirements for transgender youths, quite COMPLETELY irrespective of gay and lesbian youths?!!

Gay and lesbian factual health risks, mental health risks and over all life narratives (particularly negative aspects) are being co-opted/twisted and used as scare tactics to sell transgenderism gay/lesbian conversion therapy to the general public, school authorities and parents alike! But for the HIGH price of their transgender purchase, what exactly are parents buying their daughters and sons?

"Persons with transsexualism, after sex reassignment, have considerably higher risks for mortality, suicidal behaviour, and psychiatric morbidity than the general population." and "This study found substantially higher rates of overall mortality, death from cardiovascular disease and suicide, suicide attempts, and psychiatric hospitalisations in sex-reassigned transsexual individuals compared to a healthy control population."

Had gay/lesbian children/youth merely had parents and authority figures to care, accept and support their natural differences, rather than chemically/surgically reshape them into something seemingly hetero (masculine/feminine) normative/acceptable, we could bury transition-conversion therapies and stop burying our now transgendered children/teens and adults.