A concerned reader alerted me to yet another transgender film, this one starring Naomi Watts, Elle Fanning, Susan Sarandon due to be released this September. The film portrays Watts as the mother of a daughter/Fanning (likely lesbian) who cannot handle dyke difficulties/lezbophobia/misogyny/sexism (difficulties the lesbian grandmother/Sarandon knows first hand). The film unknowingly mimics the real life situation older dyke generations have been (myself documenting) witnessing by growing droves of Trans Trenders (lesbian youth). The pre-T Fanning could easily find herself on this blog's Who is Transitioning posts: 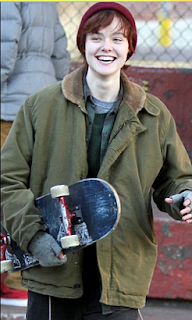 The film drastically veers from its real life mimicry when the lesbian grandmother/Sarandon not only accepts her granddaughter as a boy, she joins the mother/daughter team to garner the father's signature for the life shortening/life altering/life poisoning drug testosterone-required for the (lesbian) daughter's boyish transition. Not having seen the film (but reading the lines/between the lines of the actresses' interviews on the film/reviews etc) I suspect the lesbian grandmother's/Sarandon change of mind (heart?) happens when the granddaughter/Fanning is attacked: 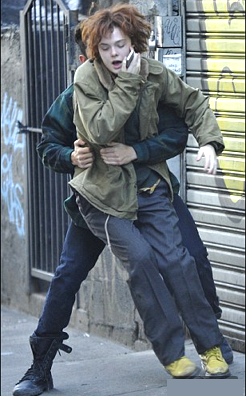 The veering regardless of the circumstance, occurs with the lesbian grandmother's acceptance/enabling of her granddaughter as transgender. As a writer who has received many a comment/email on this very subject from lesbian mothers/co-parents/lesbian grandmothers of a daughter/granddaughter caught up in the YouTube fun frenzy of female transition, these lesbian parents/guardians quickly nipped these girls youthful exuberance to join the transgender craze in the bud!

Lesbian parents particularly, realized that in shielding their lesbian daughters of the harshness, grittiness and sometimes brutality of the lesbian hating universe that was out there, they also shielded them from all the unique, wondrous edgy us-against-the-world beauty of  lesbianism and when you times that by two, look out! Heavenly Heavenly Heaven, only without all the man-made gods!

This film is clearly another baseball bat to the head of lesbianism, only using liberal leftist Hollywood stars poised with louisville sluggers. 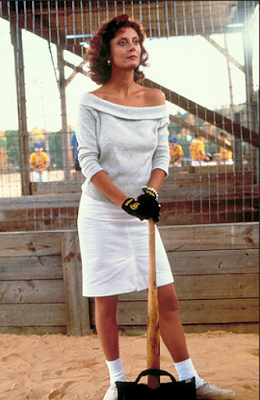