Trans female Michael Saum's story was recently picked up by the watchful eye of the liberal pro trans media hoping to use her tragic story as another step toward California legalizing euthanasia. 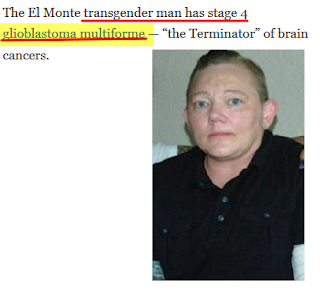 While Trans/Liberal media were focused on the Right to Die issues with Saum's story, they inadvertently let some key issues slip out of their clutches.

A little background on Heidi Saum:

WOW her tumor was larger than it EVER was! What could have happened?

Saum had battled cancer for 14 years and won, she went into remission! At this time in her life she decided it would be a good time to transition from lesbian to transman! Certainly no doctor in their right mind would give a former female cancer patient who suffered from glioblastoma, regular macro-doses of testosterone?


A little about the glioblastoma:

Glioblastoma tumours affect more men than women. Women during their reproductive years are suspected of fairing better due to the protective properties of estrogen. Glioblastoma tumour growth seems to also increase in men. While Saum clearly developed her tumour long before her transition, there is so much unbelievable overwhelming evidence that Saum's brain tumour came back and came back with a vengeance because she was given HIGH doses of the male hormones (testosterone)! Sex steroids, particularly males (testosterone) influence/increase these types of tumours! If I as mere medical pedestrian can determine how insane transition using cross sex hormones in any dose, let alone extreme doses as a course of treatment for Saum's mental issues, why didnt the mental/medical professionals????

Heidi Saum, soon to be another lesbian murdered by medically approved testosterone poisoning.