A very brief history on the struggles/equal rights and current standings of a few minority groups in the US.


Trans-vestist/sexual/gender notions sprang from the loins of psycho/pseudo/mental/medical-sexologist dating back to the mid 19th century. Early sexologist/psychologists believed homosexuals were somehow inverted (born in the wrong body), meaning gay males having a female brain/lesbians having a male brain. In this light homosexuals couldnt be held responsible for their perversions, but potentially treated/cured. 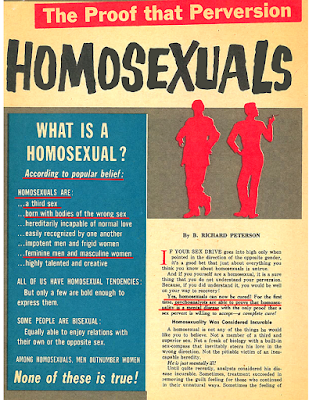 Homosexuality being labeled a perversion was linked along side other sexual perversions, particularly transvestism.

But despite (torturous/barbarity) efforts from mental/medical practitioners, no matter what they tried they could not for the life of them cure homosexuality disorder. Then bing bang boom after a few disastrous trial and errors, cross dressing fetishists posing as male homosexuals were being treated (successfully) with female hormones to help them appear female externally (remember the ignorant notion of homos having female brains). As cross dressing fetishist caught on, more and more sought sex changes to further their fetish highs using homosexual narratives to do so.

Homosexuals and heterosexual cross dressing fetishists, despite the link by the psychiatric community were at far ends of the universe socially and politically. Cross dressing fetishists enjoyed their straight (usually white) male privilege to further their careers, marry, have children and take full advantage of all the rights (which is all the rights) white straight men were afforded. While homosexuals were attacked, killed, preyed upon, harassed, fired from jobs, lost housing, lost children, lost family and were just plain lost within suffocating closet.

It wasnt until homosexuals began demanding our rightful rights, gaining some ground on attaining those rights, throwing wide open the closet door that cross dressing fetishists quickly attached themselves to us like cancer to a healthy body. Through that attachment, in a very short period of time cross dressing fetishists have completely over taken every single gay/lesbian or lesbian organization or fully inserted their twisted sexual agendas into ours.

The Transgender Explosion can partly be explained by the homophobic mental/medical health community still trying to cure suspected homos of our unnatural perversions and preventing us from growing into homos. Perversions linked early on with cross dressers and pedophiles alike. Between the American Psychological Association's (APA) marriage to Big Phama for the dual purpose of aligning them with science (there is still NO science behind transgender theory) for reasons of legitimacy and a cashing in on a multi-BILLION dollar industry it is a win win for both to diagnose/treat as many gays and lesbians as they can regardless of age or consent. Meanwhile the Trans Politic-those cross dressing straight male fetishists can access little girls and womens private spaces with new laws passed nearly every day!

But the Trans Explosion cannot merely be explained by the long history of homophobia within the psychiatric domain, even though there is serious money being made. What the Transgender Explosion required was an openness/acceptance on the part of liberal America. The same liberals who claimed to accept/support homosexuals/homosexual rights. But as I indicated throughout this article, gay and lesbians havent enjoyed any legal/human right that wasnt hard fought and won. Of those rights, they have been few and far between and growing farther apart everyday. Watching gay and lesbian rights is akin to watching a child being born while on rewind. But within a VERY short period of time, transgender special rights have flourished, and could ONLY have flourished with the support of the massive liberal left, signaling one possible conclusion: liberals were/are as uncomfortable with homosexuals as the religious right was if not more so.

Homosexuals who are aware of what is truly going on with Trans Politics/Agendas are experiencing a kind of cultural insanity because we have found ourselves on the same side of the fence as republicans/religious rights groups. It is not within in our wildest dreams that this has occurred, but in our waking nightmares.