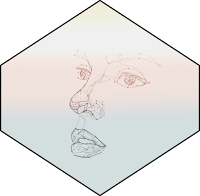 I'm not a boy. But I'm in boy space. I navigate boyhood while being a girl. I learn the boy ropes. Boy rules are applied to me. I find myself partly confused, and partly proud by this application. Only I don't remember filling a boy application, surely I must have. I forgot is all. I have no girl friends, only boy friends. Of them it is a constant sizing up; him sizing me up, me him, him him. "Do you want to wrestle" a boy asks? "Ok" I answer. I take him down quickly. I now understand the game, I'm three years old. Wrestling is fighting, without fighting. Wrestling tells us both who is stronger, it tells other boys too. If Paris is the toughest boy in the 3rd grade and I beat Paris wrestling? I beat Paris wrestling. But I'm not a boy. There will be a long line of boys I will wrestle in my youth. I will beat all of them, a true Olympian with all the blood, sweat and many tears, but none of the gold or the glory.

I also learn from my boy-girlhood that if I hurt I cant cry. REAL boys don't cry. I'm not a real boy. I'm a girl, so I cant even afford to wince. Not even while jumping a ramp 5 cement bricks high (the record) and landing on my head sliding onto the gravel road I live on. I didn't cry. Not even while my friend is taking his school ruler (a trick I discovered) to scrape the gravel from underneath the skin in my back and shoulder where it had caught. I still have the scar on my right shoulder.

Fourth, fifth and six grade I have to catch the bus from the elementary school. In the winter my best friend and I leave early to catch the bus, so we have time to play King of the Mountain. The pile of white is as tall as the school. When we approach, it is littered with a few dozen boys who speckle it with snowsuits. We're a team. We take the mountain over right off, only he and I on top, we defend the mountain till the bus comes. We do this all winter, some boys hate us, but they're only peasants, we're Kings! I learn in school only boys are Kings, I'm confused again.

There is a subtle shift between the boys and the girls in about grade 6, something is changing. Boys are noticing girls and girls are noticing boys and boys want girls to notice them. I want girls to notice me too, but they don't. Girl/boy games begin being played. I promptly learn this is a game in which I can only be a lonely spectator, I watch from the sidelines till tenth grade. I'm noticed and I know I'm noticed. I like it, it feels so fucking good, but so fucking scary. She's a cheerleader. I start going to all the football games. She finds me at halftimes, I walk her home from the games other times. She smells sooo good. I find out her perfume (wild musk). I buy a small bottle at the drugstore so I can smell her even when she's not around. I realize my best friend likes her too. He doesnt say, but I know. He tells me I'm hanging out with her too much, I think not enough. Every second of every day wouldnt be enough. I realize he's jealous.

One day after football, my friend and I are tossing the ball around, practicing plays, talking. He brings her up in the conversation. He tells me some negative stories he has heard about her the previous year, before we knew her. I don't believe him, then or now. She was a nice girl, but I don't say that. I just listen. As we're throwing the football back and forth to each other, he builds a case against her to me. I'm still just listening. He says "this is what you need to do...." I dont wanna do what he proposes. She'll get hurt. I hurt her, she says she "hates" me. I hate me. I tell myself it was for the greater good of my friendship with my best friend. I know it was really because I was afraid. Too afraid to let her get close me and too young to know vulnerability doesnt equal weakness. Something I still have to remind myself from time to time.

The next year, another cheerleader, another mutual crush, only without the strength of emotion I feel for the first, but a similar situation does ensue. She's in my biology 102 class, I flunked biology 101 the previous year. My nickname at home is "no-good-ignorant-kid", to which I usually respond with a smart alec "I'm not ignorant." I dont deny being "no good". Sometimes though just to be sure I'm not really ignorant, I have to test myself. So I take the more difficult class than the one I flunked. I apply myself. I'm acing the class. I'm not ignorant. She knows a mutual friend who sits next to me, so she starts sitting with us. I help her from time to time with her homework and tests. She calls me at home sometimes, she calls my best friend at home too. We're surprised when we find out she's calling us both. She invites me to some of her away games. I go. My friend starts talking about her a lot, he's never talked about any girl this much. He really likes her. He's 16 and has never had a girlfriend. I think he wants her for his first. An opportunity arises during a basketball game which I know will cause her to dislike me. I cause her to dislike me. She stops talking to me and sits somewhere else in biology class. My friend and her date for most of 11th grade.

The year after that, again another cheerleader. I have her in one class. Her brother starts playing football with the group of guys I play with. He tells me "my sister talks about you all the time". I ask what she says about me, he's faithful to her and says "only good things" then laughs. Hmmm. She must like me I think. She's thin with short black hair, cute as well as cocky. Being shy myself, cocky is good. I'm not doing well in the class of mine that she is also in. She makes me copy her homework so I'll pass. I could really like her. I do really like her. She's nice and makes mention often to me about how "tough" I am. She says "tough" like she's impressed. She says "tough" and I feel heat in my pants. I dont know what any of it means and wont for years to come. I think she knows I have a bad home life, she alludes to it. I say little and feel ashamed. She's slowly trying to get close to me, and I can feel it. But my shame is greater than my need. I quit school half-way through the second semester. I never see her again, nor do I make any attempt to.