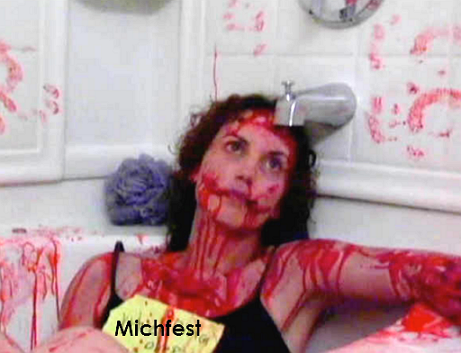 Michfest, the female only campground who hosted femalecentric workshops, comedians and musicians, many of which were lesbian and who housed over the course of a Michigan summer week up 8,000 female campers in her prime is dead at age 40. Like any of the 5 women violently murdered in the United States on any given day by men, Michfest has become another female victim of Male violence.

Since Michfest began some 40 years ago, males have in one way or another struggled to penetrate Michfest's womyn born womyn gates. Michfest road high during the feminist/lesbian feminist hey-day. The scent of female pride, lesbian pride and feminist power rode the wind straight into the snarling nostrils of male paraphiliacs. When these paraphiliac men first tried entering Michfests privately owned gates (looking for their next paraphilia trans high) Michfest festies with a mother's courage, batten downed the hatches and honorably defended her. But over the years as attacks became more frequent, invaders increased in size and politically correctness superseded female rights and autonomy the last breaths of Michfest is being violently twisted from her gurgling throat from course masculine hands while men masturbate, some women look on and cheer, other women avert their gaze and a few of us cry.

Somewhere in this country today a woman's life has reached a violent end at the hands of a violent man (likely one who told her on many occasions he "loved" her). If you fail to see the connection between her and Michfest, then open your fucking eyes!