To refuse to be a woman, however, does not mean that one has to become a man. 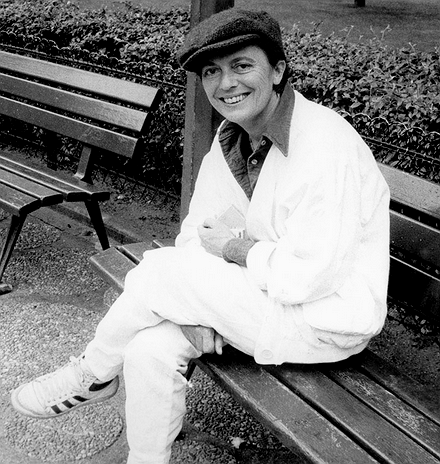 Monique Wittig was born in 1935 in Alsace and later educated in Paris, she was a writer and feminist theorist. Wittig published her first novel (L'Opoponax) when she was 28, winning the prestigious Prix Médicis award.

Les Guérillères was Wittig's next work published five years later. It is a ground breaking work for several reasons; throughout the work Wittig uses the French elles meaning they to refer to the dominant sex of the work which are women. In doing so Wittig empowers the women in her work by elevating them to elles/they, they being inclusive to men. See below: 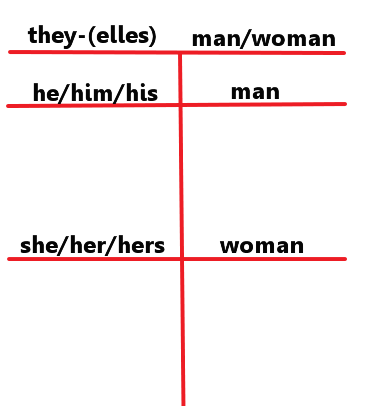 For Wittig, gender in language is the "fictive sex." Linguistic gender marks social convention, she says in an essay entitled "The Mark of Gender," "cast[ing] sheaves of reality upon the social body, stamping it and violently shaping it." Thus, as women are marked by gender in language (particularly French), so are they marked in the social world, always particular, never universal as is "man."
Other masculine conventions, such as the power of the phallus, are refused and examined for absurdity: "They do not say that vulvas with their elliptical shape are to be compared to suns, planets, innumerable galaxies.... They do not say that the vulva is the primal form which as such describes the world in all its extent, in all its movement. They do not in their discourses create conventional figures derived from these symbols."

Le Corps lesbien/The Lesbian Body was Wittig's next book, a further extension of Wittig trying to carve female/lesbian out of the by-male-for-male language (which is language itself) and which is all females have to work with still. Wittig has this to say about the construction of The Lesbian Body:

"So let's go back to my literary workshop, where I am with fire between my teeth and still nothing by my blank page. Suddenly giving me a big laugh (for one can laugh even in anguish) two words came in: Lesbian Body. Can you realize how hilarious it was for me? That is how the book started to exist: in irony. The body, a word whose gender is masculine in French with the word lesbian qualifying it. In other words "lesbian" by its proximity to "body" seemed to me to destabilize the general notion of the body....From these two words the whole book The Lesbian Body unraveled. Not in one piece, but little by little as one describes an armour. First the helmet, then the shoulders, then the breastpiece etc. Such was my "Lesbian Body," a kind of paradox but not really, a kind of joke but not really, a kind of impossibility but not really".

In trying to write about the moment by moment raw love between lesbians, Wittig literally stripped language and the body to the bone piece by bloody piece, "staying practical and pragmatic without sentimentality or romanticism". From The Lesbian Body:

"M/y clitoris m/y labia are touched by your hands. Through m/y vagina and m/y uterus you insert yourself breaking the membrane up to m/y intestines. Round your neck you place m/y duodenum pale-pink well-veined with blue. You unwind m/y yellow small intestine. So doing you speak of the odour of m/y damp organs, you speak of their consistence, you speak of their movements, you speak of their temperature. At this point you attempt to wrench out m/y kidneys. They resist you. You touch m/y green gallbladder. I have a deathly chill, I moan, I fall into an abyss, m/y head is awhirl, m/y heart is in m/y mouth, it feels as if m/y blood is all congealed in m/y arteries. You say nevertheless that you receive an enormous quantity of it on your hands. You speak of the colour of m/y organs. I cannot see them. I hear your voice hissing in m/y ears, I concentrate on listening to you. I see m/yself stretched out, all m/y entrails are unwound. I open m/y mouth to sing a cantata to the goddess m/y mother. M/y heart fails in this effort. I open m/y mouth, I admit your lips your tongue your palate, I prepare to die by your side adored monster while you cry incessantly about m./y ears".

In our current post modern age of (trans) Identity Politics, feminist groups routinely state that gender (woman) is a social construction. Wittig however was one of the first feminists to state the obvious and then go a step further by taking that obvious to its logical conclusion when she declared in her essay One is not Born a Women that "lesbians are NOT women."

Wittig died of a heart attack on January 3, 2003, she is survived by her partner and collaborator, Sande Zeig.

Wittig worked to escape the social constructs of femininity/woman in her writing transforming her life and the lives of lesbians from the bowels of the garbage heap man relegated them centuries ago to the heights of the beautiful the powerful and the unique. Wittig did woman differently because she realized she wasnt a woman, but a Lesbian.