You for whom I wrote, O beautiful young women!
You alone whom I loved, will you reread my verse...?
Will you say, 'This woman had the ardor which eludes me ..
Why is she not alive? She would have loved me 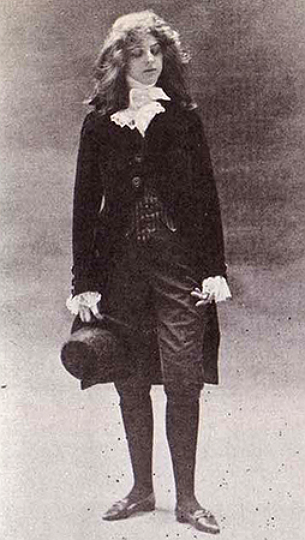 Renee Vivien was born Pauline Mary Tarn in England on 1877. Pauline was educated in Paris, where when she turned nine, her father died and her mother forced her back to England, while also trying to declare Pauline insane in effort to collect Pauline's inheritance left to her from her father. She was made a ward of the state until the age of 21 when she legally came into her inheritance. Her youth was difficult and lonely and Pauline soothed her grief and loneliness with literature and poetry, in the reading and the writing of both.

Pauline moved back to Paris at age 21 and soon changed her name to Renee Vivien. She quickly met up with a childhood friend Violet Shillito who introduced Vivien to the American heiress Natalie Clifford Barney  who ran what would become a very famous salon for lesbians/artists of the day such as Colette, Joyce, Edna St Vincent Millay, Gertrude and Alice, TS Eliot, Isadora Duncan, Ezra Pound, Nancy Cunard, and Peggy Guggenheim, as well as Adrienne Monnier and Sylvia Beach, F Scott Fitzgerald, Caresse and Harry Crosby, Sinclair Lewis, and Janet Flanner.

Vivien and Barney soon fell in love and had a very passionate affair. Renee however ended it due to Barney's affirmed open door policy to relationships, although she did pursue Vivien multiple times trying to get her back. Somewhere between the ups and downs of the relationship, Vivien's dear friend Violet died, forever leaving Vivien with intense feelings of guilt for being rapped up in Barney rather than the health of her friend. All this coincided with the publication of Vivien's first book of poems Études et Préludes.

Vivien continued to have very intense passionate affairs with women whom always let her down or left her. Perhaps Vivien sought these kinds of relationships out because they replayed over and over the losing of her father when she was nine, grief and loss being something Vivien knew intimately and maybe through revisiting intimately hoped one day to change the outcome. Sadly that day never came for Vivien, but these intense loves and losses did produced lasting beauty through the art of both Vivien's prose and poetry. Where Vivien's art failed to heal her broken heart, she self medicated with chloral hydrate and alcohol, both of which caused Vivien stomach issues. At the young age of 32, weak from not eating she contracted pneumonia and died in 1909.

Despite the many emotional trials Vivien suffered, she produced 17 volumes of poetry and 16 volumes of prose. Vivien wore woman differently in several very pertinent ways, she was a poet when women werent poets, she was an out lesbian when even today in our time it still isnt safe and she outly and proudly wrote of her love for women. All of which has went to inspire future lesbians, to write to love and to hope in the absence of light.