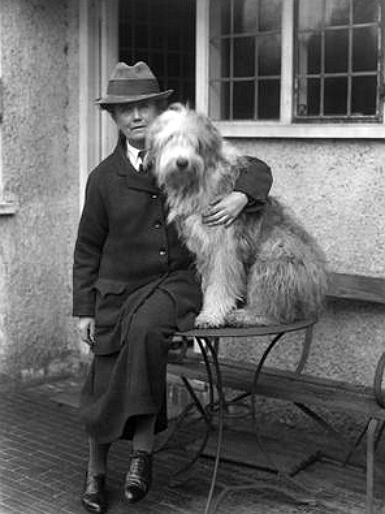 Ethel Smyth (23 April 1858 – 8 May 1944) was a British writer of both classical music and words. She was an activist in the suffragette movement, including composing an anthem for the suffragettes titled March of the Women....

Comrades—ye who have dared
First in the battle to strive and sorrow!
Scorned, spurned—nought have ye cared,
Raising your eyes to a wider morrow,

Ways that are weary, days that are dreary,
Toil and pain by faith ye have borne;
Hail, hail—victors ye stand,
Wearing the wreath that the brave have worn!

Ethel Smyth was also friends with many great women of her day "including Virginia Woolf, Empress Eugenie, Emmeline and Sylvia Pankhurst, and Vita Sackville-West." Smyth's music composition studies were primarily through private study, having become disillusioned with her studies at the Leipzig Conservatory. Between her brief Conservatory stay and her private tutors, she met such famous composers as Dvořák, Grieg and Tchaikovsky, Clara Schumann and Brahms. Mass in D is considered Smyth's greatest musical composition, it was dedicated to a female friend/lover Pauline Trevelyan.

In an age where women composers were unheard of, women fighting for the right to vote thought insane, women sharing close friendships and romantic loves hidden, women in tweeds and ties and hats frowned upon and women playing sport laughable, Ethel Smyth did as much and much much more. Her daring cracked open doors for future females to walk through and inspire them to crack open doors themselves. Broadcast in 1937, listen to the feminist Vera Brittain speak of Smyth's example and Smyth discussing a suffragette incident that got her arrested and jailed for several months: