Simone Weil (1909-1943) wore female as differently as she did the human spirit. She was a child prodigy, a proletariat cloaked in a bourgeoisie upbringing, a philosopher, mystic and saint without canonization. She was a French Jew who unlike the forefathers of America didnt merely write that "all men (and women) are created equal," she cast off her upper class privileges and toiled in factories working AND educating factory workers in effort to see to it first hand that ALL through education will one day will become equal! 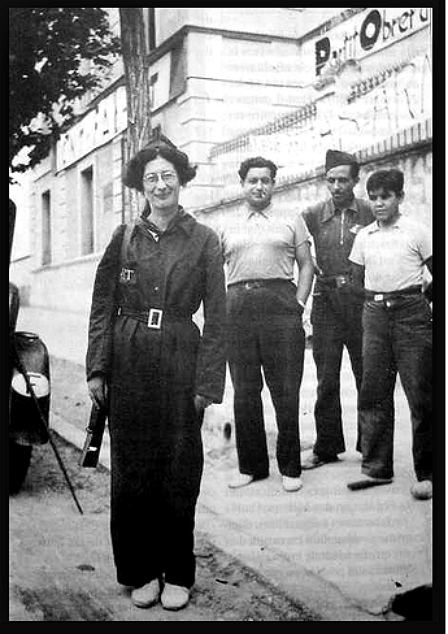 Despite suffering debilitating headaches, a small frame, lack of gracefulness and general over all poor health since childhood, Simone never allowed her body to limit her strong held beliefs of righting, wrongs. When she was about six years old, during the first world war, she refused to eat sugar in solidarity with soldiers who were at war. As a young woman, Simone even called out Trotky who was visiting her family while on the run, telling him "You are the idealistic one. You are the one calling a servant class the dominant class."

Regardless of a top notch education, Simone got factory work where she educated factory workers, used her education to pen pamphlets advocating for better worker's conditions and worker's rights. Yet due to Simone's clumsiness, she frequently received injuries while working in factories, but this never stopped Simone in her factory endeavours anymore than it stopped her from later joining a Republican faction and fighting in the Spanish Civil War.

But Simone's poor health, pure altruism and self of right over wrong eventually took their toll, she died in 1943 suffering from tuberculosis and starvation from wanting her food rations given to those more needy in Nazi occupied France.

I first discovered Simone Weil when I was 16, she has been a source of both inspiration and righteousness to me for the past 30 years and will continue to be if by chance, luck or destiny I live another 30.