Breast Shame-Fear and Sexism in ALL FTM Visuals 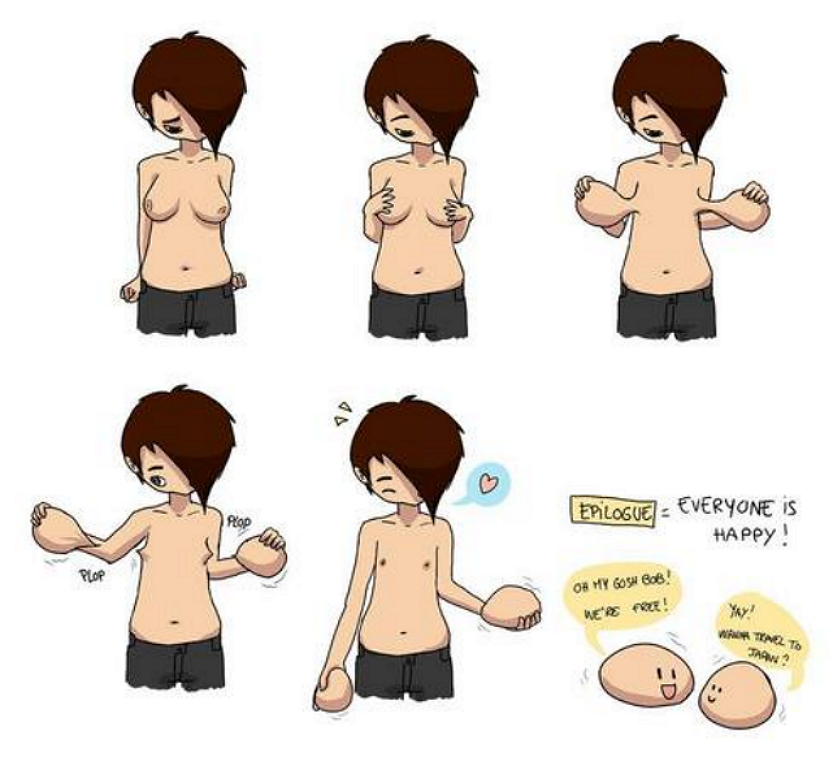 The above was recently sent to me after having made the rounds on the trans female tumbr circuit. All I have to say on the cartoon is no one lives happily ever after a double mastectomy. Healthy breast wind up in a hospital incinerator, leaving behind a permanently disfigured body.

This cartoon however does bring up another nefarious trans trend among trans females: Shirtlessness.

Nealy every trans female video made involves some form of shirtlessness, whether shirtless videos made before top surgery, where breast are below camera level or countless shirtless videos after top surgery. You would be hard pressed not to find one or both of these scenario's among pictures or videos of a trans female. This alone should be reason enough to cease and desist a female's transition, because through even this window whats informing the transition is crystal clear. Shame, fear and sexism.

Breast shame and sexism surrounding breast begins before girls even have what society considers boobs. Adults of both sexes point at young pre-verbal girl chests whenever they do not have on a top, while only gently teasing, this VERY early breast shaming sends harmful messages to female children. Made worse if there are male children in the household not receiving the same messages. Even girls allowed to go shirtless around the house or yard, at a certain age will be forced to cover up by parents/authority figures, whereas boys of the same age continue going shirtless whenever the fancy strikes them.

Girls grow up being taught first to hide their breast, then being taught their breast are for the benefit of males, or particularly the Male Gaze. Once upon a time females were taught breast were also made to feed their children with. In civilized societies, breast are no longer for nourishing children, they are solely for male cock pleasure. Breast have systematically become nothing more than consumeristic sexual OBJECTS for men! Women are shamed (or arrested) out of even breast feeding their child in public, NOT because their is anything sexual about a breast or breast feeding BUT because patriarchy has sexualized breast and therefore breast feeding!


So we come to trans females and breast, those who have ingested/pathologised all the shame, fear and sexism about breast to such a degree, these girls/women associate shirtlessness with male only. So in video taping themselves without shirts, pre or post top surgery, in their non feminist minds, they are actually BEING male when doing so! Because ONLY males go shirtless! It is complete male mimicry, NOT males confined within female boobied bodies! Going shirtless in the trans female mind, it surpassing the limits breast place on other women. They as trans females get to do something other women do not, they while still obviously female skirt femaleness and can now tread in male shirtless space.

Where their fear and shame stopped them from challenging patriarchal rules around female breast, they instead medically cower to patriarchy's breast rules. Nothing transgressive occurs via hiding female breast through videoing above naked breast or surgically having healthy female breasts removed. Shirtlessness in trans female videos does one thing, it proves that breast shame, fear and sexism is real and needs to be front and center of our feminist fight!