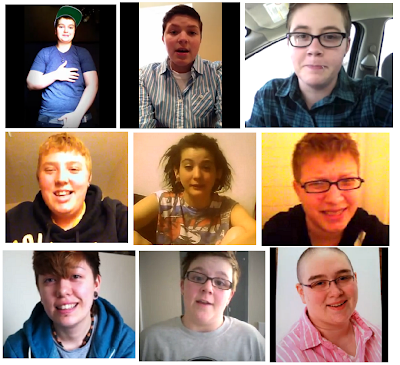 Its is a statistical fact per the medical community and female transitioners themselves, that nearly 100% of all females who transition began transition as lesbians. When I first understood/admitted to myself that I was a lesbian, I climbed the highest ladder leading to the highest diving board and dove in. I submerged myself in all things lesbian. Lesbian her/story, lesbian art, lesbian music, lesbian literature, lesbian poetry, writers, poets, musicians and artists who were lesbian. Lesbian. Lesbian. Lesbian. And somewhere between all that and my own feelings, I arrived at what I believed and still believe a lesbian relationship entails. There is a line from Ferron's song Our Purpose Here that has always summed up perfectly to me lesbian relationships "It's a woman's dream this autonomy/Where the lines connect/
And the points stay free."

It is incredibly sad that every female who will proceed (recede?) into transition will never get to experience the depth from where that line pointedly connects, existing only between lesbians, nor the limitless frontiers existing simultaneously. It is this regret that I have heard most often from lesbians who transition. How many many times have we heard female transitioners say their first trans highs of "passing" were coupled with a sharp pain because it coincided when lesbians began looking right past them as if they didnt exist. Single though I may be, I couldnt imagine a future were that possibility no longer existed, that would be death, more than the death that will one day put me in the ground.