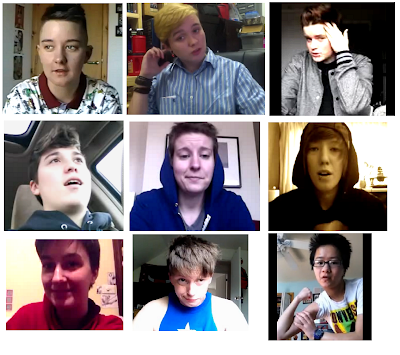 Someone recently contemplated in a comment, "where are these young women's mothers?" I think this article sadly sums up where some of them are "I’m so proud of her". Proud? What mother not completely indoctrinated within the confines of the Gender Straight Jacket would be proud of their daughter's self hatred??? A daughter who only "has felt like a boy for the past three or four years." A daughter who said "When I was younger I was quite girly but then I started getting into football and hanging out with boys. I started wearing more boys’ clothes and doing less girly things.

Now I ask you, what mother would not see this as an important moment to dismantle the sexist, misogynistic ignorances of "girly, boys and football, boys' clothes and girly things" and instill a serious sense of pride in her daughter by removing her daughter's limited view of female and replace it with a limitless reality of female!

The mother goes on to say that "her own punk attitudes had influenced her parenting" her daughter. Well Miss mother, unlike piercings that can be removed or mohawks which can be grown out or blue/pink dyed hair washed out, the hacking off of healthy breasts canNOT grow back. Stunted growth of living organs, including the brain, canNOT be restored to proper normal growth/function. Various hormonal changes from high dangerous testosterone poisonings canNOT be reversed. And cancers from those dangerous drugs wont magically go away if hormone use is stopped. This mother seems more concerned her child is a societal rebel like she was than actually bothering to educate herself on her daughter's issues not to mention the homophobic history/present of transition itself!!!

This isnt the unconditional love of a mother, it is love on the condition that her child fit in, no matter what!