The Gender Straight Jacket and Misogyny begin at Birth

I was recently made aware of this video, within it contains a question I would like to answer. See question below: 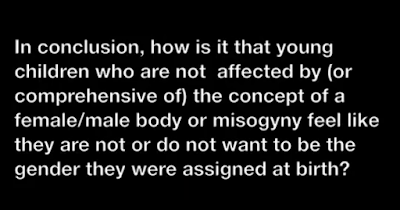 You have a very naive understanding of the child mind and its workings. Literally from day one the child brain begins taking in all that is around it. The child mind, being a cross between a tabula rasa and a sponge; absorbs, absorbs and absorbs some more. Which is why we so often hear it is much easier for a child to learn another language than it is an adult.


That being said, many children, myself included, refused total conformity to the GSJ, usually around age two which is when we first become aware of ourselves as individuals. One a personal note I ceased wearing dresses at age two. That refusal clearly indicates that I had already ingested the GSJ and resisted being the "girl" outlined by the GSJ and instead chose the be the girl I was. But in doing so, by age three, my sex began being questioned or mistaken by strangers (are you a boy or a girl?).

Around this time children start making friends and comparing themselves to their peers. Again, on a personal note, my peers were males, therefore that is who I compared myself. I may not have known the mechanics of male, but I knew they were "boys" while I was a "girl". Dress, play, the toys I liked etc would all be labeled "boy" per the GSJ. All went to help alienate me from the girl I was, because of the boy I was not. When we cannot be the "girl" we're supposed to be and are separated from the girl we are, we soon begin feeling like we're not girls at all. The simple truth is, as females EVERYTHING we feel IS female, simply because we're female.

I'll leave with this link for further reading, it might go to explain a bit more if I wasnt completely clear in my post.