Being a man 101-Copy Real Men, Dont shave your Pits and wear boot! 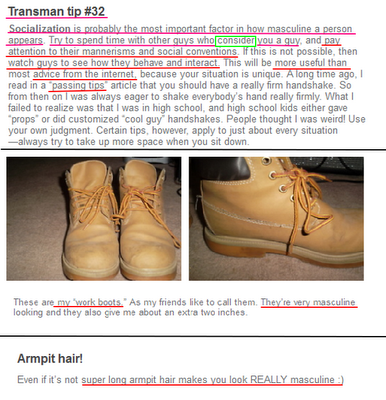 Something quite frightening sent to me from a reader, I am not sure of their origins, but clearly written by a young lady.

I must say I find it incredibly sad at just how bound and gaged by the Gender Straight Jacket and completely ignorant of masculinity and femininity so many of these young women wanting not to be women are. Similar posts have been littering the internet since the early 90's from young women i.e. post Queer Theory. All such posts have been participatory towards Trans Trending. All such posts are also indicative that the desire to transition is socially based and NOT biologically based like the disordered and the MMM would have us/the public believe.

As the Gender Straight Jacket continues to narrow for females, and girls/young women in greater and greater numbers are pathologizing that narrowness, it is imperative we reprise feminism. And not this current feminist replacement (feminism=females doing whatever women want, whatever they want to themselves/anyone else and each of their actions existing purely in a vacuum) issued per the backlash against feminism, but a true feminism! Feminism created to dismantle the Gender Straight Jacket, dismantle misogyny and all patriarchal structures built with misogyny! Because if we do not, thousands and thousands of our female children are going to have the female murdered from them.

We are in need of a feminist collective built by individual women, women taking our cue from Hillel the Elder perhaps: "If I am not for myself, who will be? And when I am for myself, what am 'I'? And if not now, when?"