And now some collected screencap comments from some of the women who were at Michfest this year regarding the threat of violence and violence made by members of Camp Trans. 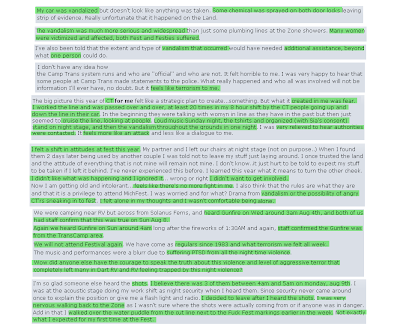 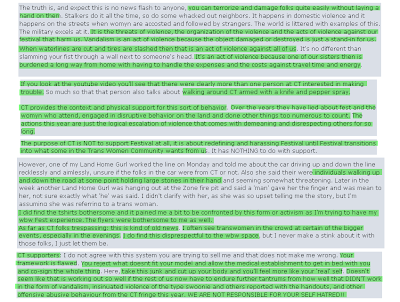 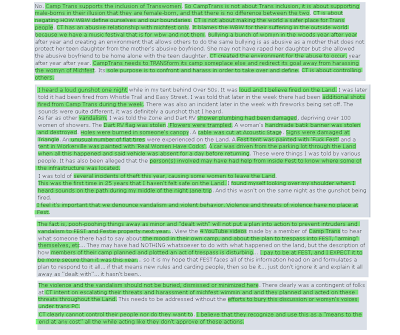 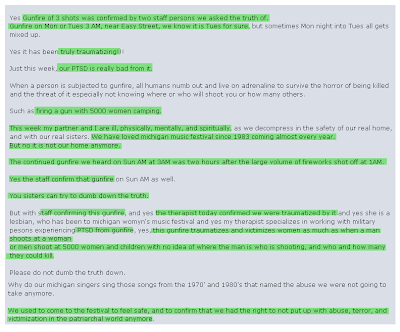 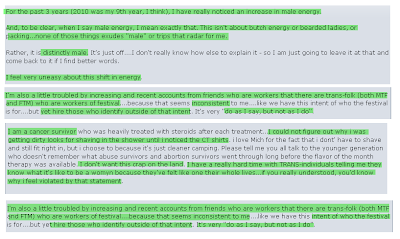 Now I'll tell you what I know based on everything posted, read, sent to me through email and some first hand accounts by friends.


The violence and threats of violence from Camp Trans members towards Michfest, and Michfest attendees, isn’t anything new, it’s been going on for decades now. What is new was this year’s escalation of violence and threats of violence by Camp Trans members towards Michfest and Michfest attendees. So what changed this year at Camp Trans to create such a hullabaloo within and outside the camp? In a word: testosterone. Or, rather a greater number of female camp members on the synthetic version of testosterone. Camp Trans 2010 was a kaleidoscope of men who insist they're women, through acting like men, and women insisting they're men through acting like teenage boys; a sure recipe for violence against the women who are womyn comfortable and proud to be women.

From testimonies made by various Camp Trans members, there was already an angry, volatile spirit running through Camp Trans before the dreaded "tow truck incident". The “incident” Camp Trans leaders have been using to diminish trans responsibilities for the anger, hate and violent actions of camp members against Michfest. So what exactly did happen regarding the "tow truck incident"? I don’t have any info on why a tow truck was called out, but apparently a Michfest member required a tow truck for her vehicle. Since Camp Trans has specifically chosen a close geographical proximity to Michfest, the tow truck arrived and while he was waiting for instruction with truck idling, unbeknownst to the tow truck driver, his truck's engine was mildly drowning out a speaker over at Camp Trans.

I've heard different stories as to how many trans(women) approached the tow truck driver, but at least two has been mentioned consistently. So at least two trans(women) approached the driver and insultingly demanded he turn his "fucking" truck off'. Startled, shocked and surprised by the vitriolic way he was asked, as well as who was doing the asking, the tow truck driver "sir'd" the trans(women). Rather than looking at the obvious, that the trans(women) were/looked like/are bio males, the trans(women) accused the tow truck driver of deliberately "misgendering" them. Other than trans or radical feminist, Jane and John Q public have never even heard of "misgendering" let alone understand the ignorance behind it. Like it or not, in the real world gender is pretty much black and white, and as long as there is a transgender voice to help reinforce strict gender notions, black and white it will remain.

Moving on...The "misgendered" trans(women) then called over dozens of Camp Trans members and angrily complain about the tow truck driver, creating a stir. The boiling point was quickly met and a mob of primarily trans(women) and trans(men) rushed offensively towards the tow truck driver as if to physically assault him. The tow truck driver jumped from his truck retrieved his tow chain for protection at which point some of the Michfest women seeing him in serious trouble came to his aid. I don’t know the details but during this trans mobs violent reaction, someone/s were pepper sprayed. Michfest members and non angry Camp Trans members began to try and quieten and disperse the mob until sanity was restored.

This incident, which shouldn’t have happened in the first place, was then used by both angry trans(women) who've been demanding year after year after year access to Michfest and by ftM youths hopped up on synthetic testosterone acting like 15 year old punk boys, insisted they (Camp Trans) should violently take over Michfest and "burn the fucking place to the ground"! Later on a "caucus" was called together where the threats/act of violence against Michfest continued to be discussed. Many Camp Trans members did not want to partake in an uprising and expressed their fears regarding getting arrested and the complicatedness of jail and trans/legal states of being. Those members were soon hushed up with threats of violence against them as well. It soon became apparent that it was an all-or-nothing-for-us-or-against-us caucus. Some Camp Trans members out of fear, left the next day. Those that stayed either supported the next few days of violence against Michfest or turned a blind eye to it.

We may not have long term studies on how high levels of synthetic hormones affect bodies which they are not designed for, but we do have long term studies on how male testosterone and those who take synthetic testosterone have the potential for an increase in aggression/violence/mob mentality (see references). Taken in its totality, what this year's Camp Trans/Michfest says to me is not only do Michfest women have to continue worrying about the enemy outside the gates (bio males-Mtfs) she also is going to have to take a serious look at the enemy from within (bio females-ftMs). If Michfest stands a snowballs chance in hell of surviving, two things are going to have to happen; one is the womyn-born-womyn working and attending "fest" are going to have to buckle down and enforce the WBW policy and two, update the policy to include womyn-born-womyn-who-ID-as-womyn.

It is clear because of inclusiveness, Camp Trans, is now on its last legs. I've already seen countless members stating they will not attend next year. I don’t give it five years myself. It is also clear Michfest needs to look at the example Camp Trans has provided with its inclusiveness that has created the loss of political focus/goals so that it is fast becoming just another place/excuse to party and as midnight approaches and the partying ends, everyone goes home. But instead of waking up with a sense of accomplishment, promise, change, they're only waking up with hangovers.