More Butch Erasure/Destruction in the name of "queer community building" 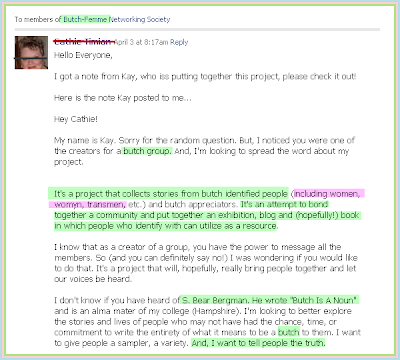 Received this in a message on my facebook a few days ago, from some group I joined last year some time CLAIMING to be "butch-femme". I say claiming because clearly were this a true blue Femme/Butch group this woman's message wouldnt have been spammed to all its members with no fucking regard. It would have been stop dead in its fucking negative illegitimate Butch destructive tracks and the sender would have been told in no uncertain terms where to put her "queer" idiot notions of "butch"!

One could say "but dirt she does say "butch identified", yes, EXACTLY and therein lies the fucking problem! Its the fucking equivalent of someone starting a "black identified" group and looking for "black identified" experience and validating the experiences of the copious amounts of disaffected white male youths who would join with their baggie jeans wrapped 'round their lower hips, their doo-rags on their heads and sporting some FUBU's on their feet with their MP3 players chock full of gangsta-rap! The fact IS like a "black experience" or any minority experience there IS a Butch experience because there ARE Butch women! Anyone can "identify" as Butch, and have and do and are all damn the time. Butch isnt something one "identifies" as it is something some of us actually ARE! And when the "fluid queer" PC infested foster ideas that Butch is something anyone can do by merely calling themselves "butch", Butch gets diluted into a "queer" pool of nothingness, unrecognizable nearly to all save the Femmes who SEE and desire us!

This woman is wanting to create some resource book for "butches" utilizing experiences by anyone from your jeans and tshirt wearing female gay or straight to ftMISOGYNIST! Think of the alien and in some cases harmful messages that would be collected there, then think of the baby Butch first coming out trying to find herself through finding other women like her and reading stories of women shamefully binding their tits, women beg borrowing or stealing to lay their hands on some "t" not even because they want to be "men" because they cannot stand the shame that reminds them once a month that they are women, think of women using male pronouns to describe themselves, think of "queer femmes" discussing how they desire "masculinity" and applying the male "masculinity" term to those THEY deem "butch" etc etc.

Then to top it off the woman closes her request by mentioning "s. bear bergman" and her HORRIBLE excuse for a book about "butches"! Firstly this s bear woman is an ftMISOGYNYST but before that she was your run of the mill tweener dyke (feel free to google past pics if you doubt me) usurping the Butch label and when she couldn't manage to squeeze herself into Butch, like so many tweener dykes before and after her, she trannified in search of Butch only to find masculinity instead, still NOT Butch!

If you are a Butch or Femme and believe and live the authenticity of Femme/Butch, if you are a member of the facebook group that spammed this message let the spammer know there are REAL Butch women with REAL Butch lives with REAL Femmes who love and adore us, be silent no more! You have a voice, use that voice and have a fucking say!

I am, with this post, as well as subtracting myself from a group that clearly doesnt have my best Butch woman interest and the interest of Butch women period in mind!